skip to main | skip to sidebar

There are quite a few places in Melbourne that I have been meaning to visit for some time and one of the places on this list is Huxtable Restaurant. One of the reasons for this is that their menu is based on the way I like to eat, divided into Bites (small individual portions) and "To Share" (larger, more substantial dishes designed for sharing). I like shared plates because they mean that you can try several different items as a group and everyone gets to try them all (if they want). So when a Saturday came up and there was not much else going on, we got a group of 4 together and headed down to Fitzroy. My good friends A & R and L (I promised I'd use their initials).
All being (relatively) adventurous eaters, we were eager to try a good mix of dishes from the menu and to start with we liked the idea of the Jalapeno and Cheddar Croquette. 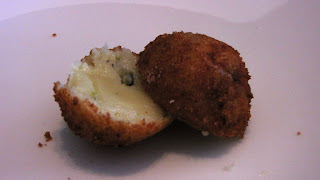 Deep fried cheesy spicy goodness is the best way to describe these, although I would have liked more of a kick from the jalapeno, it was crispy on the outside and gooey and soft on the inside. All in all, a good mix of textures and flavours.
Next I chose the Rice Flour Crusted Oyster Po'Boy, Iceberg, Sriracha Mayo. This I really enjoyed, the oysters were deep fried and crispy and the lettuce was a nice and fresh and helped balance some of the richness of the fried oysters and mayo. Speaking of the mayo, that was definitely the star of this dish for me, smooth and spicy with some of the kick I missed from the jalapeno (sriracha is a Thai hot chilli sauce). I'd definitely go back for another one, but be warned - if you don't like oysters, so wont like these (as my friend A found out) as even with all the flavour from the mayo, the oysters still stand up for themselves. 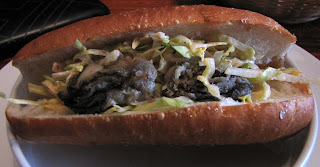 So far you might be mistaken into thinking that Huxtable serves only American flavours, but you'd be wrong as they do cover a wide variety of cuisines and show a lot of influence from all around the world. The next dish showed a bit of Japanese influence - the Tempura Eggplant Prawn Fritter, Shiso. I really like deep fried eggplant, it turns almost into a delicious, savoury fairy floss and the combination of this with prawns was something I wouldn't have put together, but worked really well. The tempura batter was light and crisp. 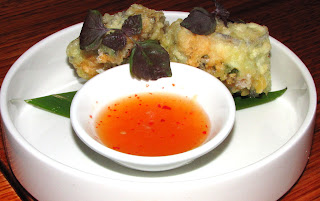 Next up was the most controversial dish of the day, with R, L and myself all wanting to try it, but A was dead set against it. We didn't mind, that just meant more for us! Here it is, Veal Tartare, Soft Boiled Egg, Soldiers. I've had a few different tartares and this was definitely one of the better ones, a bit on the acidic side, which I quite like and plenty of onion and herbs too. 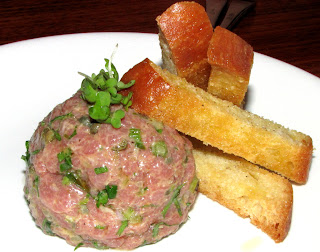 I'm not sure if R chose the next dish because she wanted to bring something healthy to the meal or not after all the fried food, but I'm sure glad she did. Quinoa w Zucchini Flowers, Pomegranate, Goats Cheese was a great combination, every element was distinct and stood out on its own, but together they were really good. The fresh spring taste of zucchini flowers balanced by the creamy tartness of the goat's cheese and the occasional burst of brightness as the pomegranate seeds popped in the mouth was a great foil to the rest of our rich menu choices. 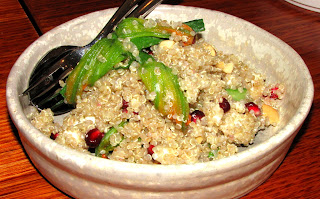 Next in line is the Roasted Duck Breast, Soy Braised Daikon, Sour Plum. Before this dish, we were discussing how we all liked the food and what might be our least favourite dish. I was struggling to come up with one dish that was any less than the others, all the dishes had been very good and well prepared. Then this dish came out and I finally had one. It looked awesome and while the duck was cooked well, the fat crisp and rendered, it was slightly overcooked for my taste. The whole dish had good elements, but overall the impression I got from it was bland. I expected more as I'm a big fan of duck, but I wouldn't order this again in a hurry. 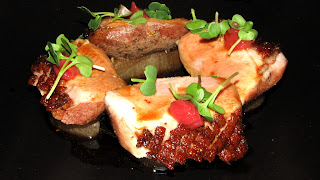 The last dish I want to talk about was the Korean BBQ Pork Ribs, Spicy Slaw, Chilli Gherkin. The skin on the ribs was crisp and the meat was sweet and delicious. The "Spicy" slaw was not so spicy and the "Chilli" gherkin had a distinct lack of heat. Even without the implied heat, this was a very good dish and who doesn't love pork? 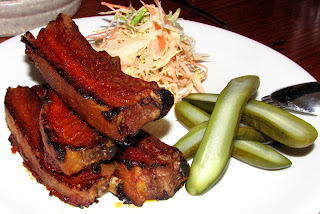 Overall, Huxtable does things very well and the food is great and varied.  I don't know if the chef is holding back on the heat deliberately, but with so much influence from around the world I would expect a bolder hand with the seasonings. Especially when dish components are described as spicy or chilli, we know what to expect when we order it, in fact in most cases it's why we order it. Why not deliver?
The waitstaff were friendly and knowledgeable about the menu and were happy to make recommendations. When it comes to the decor, even though the floor is stone or concrete, the furnishings are well designed to keep the noise level down. The layout feels good and there are several different seating options available - stools at the bar, or high tables and stools near the window which are great for people watching, or normal tables at the back. I would definitely go back again, as there are still a good number of dishes I would like to try.
Posted by Duncan at 2:32 AM

Duncan
While i have had several years training in cooking school, I am not a professional chef. I just really love cooking, food and travel.